The FanShot last night gave you the rundown on the Porche Grant incident at Rutgers after yet another ugly loss in women's basketball. (Seriously, what the hell happened to that program? Guess that's another story.) We realize that it's never OK for a player to go to the locker room with middle fingers blazing. It's been a long slog through the conference season with a lot of close losses for USF, and obviously Grant was frustrated, but that's not a good excuse. The two-game suspension Grant was handed by Jose Fernandez was swift and completely fair. Included in those two games is Senior Night, which makes it even worse.

But when I heard about what happened, I couldn't help but be perversely proud of her. I mean, I know Porche shouldn't have done it. But... it's Rutgers. They have JERSEY POW-ERRRRRRR and Jersey manners to match. What visiting athlete in any sport hasn't had at least a fleeting thought pass through their head, telling them to do what Porche did to some aggro Rutgers fan? What fan hasn't wanted to see an athlete twist off and tell Rutgers fans what they really think? They'd do the same thing to you. Or just to the nearest available camera. 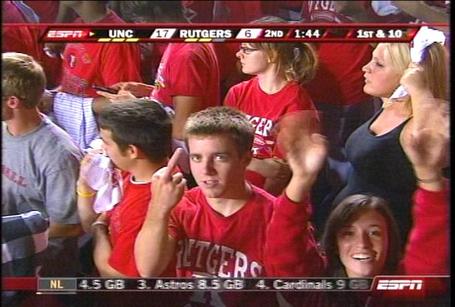 Not to mention... we really need some excitement around here. Anything to spice up writing about these teams is welcome. It's been a pretty boring year, and we're only as good as our material.

This is definitely not a unanimous opinion among the staff. But personally, when this site has been around long enough and we have enough material to justify starting a Voodoo Five Ring of Honor, I think Porche Grant should go in on the first ballot for this. I totally approve of this incident. Now never do it again, Porche.

So what do you all think? TO THE VOTING BOOTH.