South Florida, Come On Down! Your Guide To The NCAA Selection Show Is Based On "The Price Is Right!"

Share All sharing options for: South Florida, Come On Down! Your Guide To The NCAA Selection Show Is Based On "The Price Is Right!"

(UPDATED to reflect St. Bonaventure winning an auto-bid. There will be no further updates, as there are no more games with any impact. This has been your March 11 Bubble Watch.)

For only the third time in history, and the first time since Right Said Fred had a career, South Florida Bulls fans have a reason to watch the NCAA Tournament Selection Show.

As this is a new experience for us all, I'm going to try to make it easier by dividing all the possible NCAA teams into groups, based on how worried you should be if you see them in the bracket.

And because we're sick to death of locks and bubbles and cutlines and RPIs and resumes and all that jargon, our groupings will be named after games on "The Price is Right." We will also explore the parallels between America's favorite game show and America's favorite post-season sports tournament.

We realize that some of you may prefer to watch the selection show without knowing if things are going well or poorly for USF. So we're going to say spoiler alert, and put all the information after the jump. Read on if you really want to know. If we don't make it, you'll be able to actually pinpoint the second our heart rips in half.

Every episode of The Price is Right, all 7,000-plus of them, starts like this:

This is especially true for USF. The Bulls' profile is so close to the cutline, that it’s hard to imagine them going straight to the main bracket. If South Florida isn't in one of the two First Four games involving bubble teams, it's going to be an excruciating hour. But every new name they read off is reason for nervous hope, until the last name is read. (Well, not every new name. See "viewing tips" below for the places USF is most likely to appear in any bracket.)

As for the schools competing against USF for a slot in the NCAA Tournament, I have divided them into four groups: 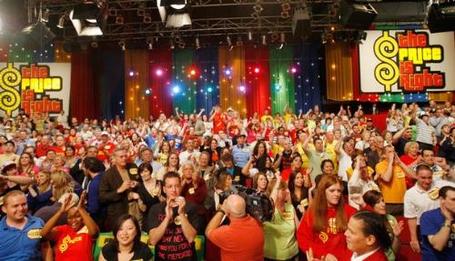 THE LIVE STUDIO AUDIENCE. These people are part of the show, but don’t play any pricing games. And since USF's game is "Get Off The Bubble," it's the other bubble teams that are a threat to our existence. Teams safely in the NCAA Tournament field can be ignored. This applies whether they won automatic bids, or have unquestionable at-large profiles.

The teams whose presence in the bracket has no effect on USF are:

Yes, 57 of the 68 berths in the tournament are pretty much locked up right now. This is actually fewer than usual; by Selection Sunday there's usually only room for a handful of bubblers. This year, and with the advent of the First Four, there's room for more bubble teams to get in. However, this next group is in line ahead of USF: 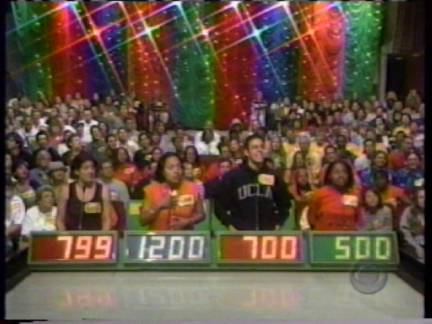 CONTESTANT’S ROW. Before you can get on stage and play against the house, you have to win a pricing game against three other contestants. This is where you see all the dick bets, cruel misfortune, and crushing stupidity that make the show so endearing.

Okay, it doesn't really go like that on daytime TV. But if you're not keeping a close eye on the contestants’ reactions in this stage, you’re missing the best part of the show.

As for our analogy: Contestants’ Row represents the "should be in" teams. These are at-large teams who are not 100% safely in the field, but have better profiles than USF, and are widely thought of as being NCAA-worthy. They’re like the opponents in Contestant’s Row in that they’ll probably all get on stage at some point. But maybe we'll get lucky and one or two of these schools will be one dollar-betted out of the competition:

NOTE: Xavier is playing for the Atlantic 10 championship today. If they win, they are automatically in the NCAA Tournament. If they lose, their profile is probably good enough to get an at-large bid, and as such are part of this group. (ETA: They lost.) 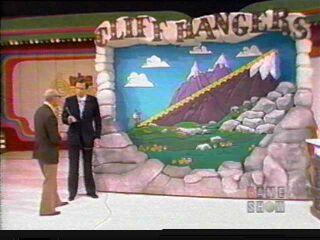 CLIFF HANGERS. In this pricing game, you have to guess the price of three small retail items, within a total of $25. It doesn’t matter which items you miss, or by how much, or in what direction, as long as the total error is $25 or less.

The NCAA Tournament bubble is like this. There's room in the tournament for about ten bubble teams, including the First Four. It doesn't matter which ten teams they are. There just can't be ten, total, before USF's name is read. Once that number is reached, our little mountain climber plunges off the cliff:

Cliff Hangers represents the mid-bubble teams -- the teams closest to USF in terms of worthiness. Some of these teams will get into the NCAA Tournament; some will not. For every one that does, it gets harder for USF. So whenever you see one of these schools in the field, imagine yodeling and your blood pressure rising:

South Florida is also part of this group, but I didn't list them since this is a USF blog, and we obviously do want to see them in the tournament. If you're a fan of a different bubble team, you can add USF to this list.

NOTE: St. Bonaventure is playing against Xavier for the aforementioned Atlantic 10 championship. That is their only chance to make it into the field. If the Bonnies win that game, they're automatically in the tournament; if not, they have no chance of making it, and can be removed from this list. (ETA: They won, so I moved them into the "audience" group.) 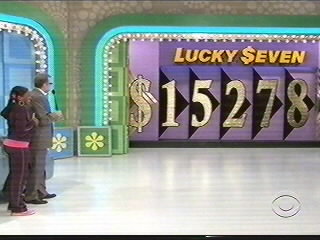 LUCKY SEVEN. This is, by far, the worst game on The Price is Right. It's just plain mean. It teases you with the biggest prize on the show, then makes you guess random numbers to win it. And the margin of error is tiny. In most games, you can miss the price of the car by $1,500 and still win. In Lucky Seven, you can miss it by $25 and lose. I would accuse this game of torturing puppies in its spare time, but I'm sure Bob Barker wouldn't stand for that.

To win, you have to guess all five digits of the price of the car, even though the last three digits of any car price are highly variable. An option as trivial as a center armrest on a Mazda can change the price of the car by $170. In Lucky Seven, missing the next-to-last digit by $30 will cost you half your stack. (In another little nicety of this game, you get seven dollars to start, but you have to have one left at the end. So you really only get six.) And, as in the above photo, the last digits are often high or low, just to destroy anyone who correctly estimates the price of the car.

When people do win this game, you get the feeling they're just guessing. But what else can they do?

Lucky Seven represents the pain of losing something of great value over somebody's subjective valuation. This could happen to USF, if the Selection Committee somehow decides that one of these lightly-regarded bubble schools is more worthy of a bid:

So how does this information help you watch the Selection Show?

There are 57 teams safely in the field, including St. Bonaventure. There are 68 berths total, so that means eleven teams have to come from the last three groups. Once eleven bubble teams make the field, there's no more room for USF. If you want to check them off one by one, I've compiled them all into one convenient list:

Here are some more viewing tips, just in case you want to know even more precisely when to panic during today's bracketological striptease.

Contestants not appearing on stage will receive a trip to the NIT and a Rug Doctor: steaming mad at dirt! Some portions edited for broadcast. Contestants must meet eligibility requirements. Do your part to control the pet population: have your pet spayed or neutered. Good night, everybody!