Florida State and Clemson moved to the SEC, like in yesterday's sim. Louisville went to the Big XII, but instead of BYU, it was THESOUTHFLORIDABULLS taking the last spot in the Big XII. The ACC added Pittsburgh and Syracuse, then picked off the other three "legacy" Big East teams (Rutgers, UConn, and Cincinnati) and added UCF to get to 16 and match the SEC. The Big East was restocked with C-USA teams but lost its autobid to the Mountain West, because Boise State and San Diego State remained there. Everyone else stayed put for the most part, but I moved Troy, SCUMBAGS, and Arkansas State up to C-USA to balance out the number of teams in that conference and in the Sun Belt. More on one of those teams in a minute.

With 12 teams in the Big XII again, here's how I arranged the divisions: 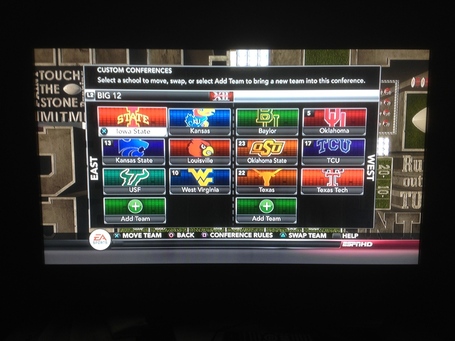 Basically I put the Big XII South back together, with TCU replacing Texas A&M. The three former Big East teams are reunited in the opposite division. It's all so logical, why can't this happen? Please? Anyone?

Now then, you want to know how this all turned out. After USF went 4-8 in a miserable ACC, you probably think they got destroyed in the Big XII. Not so much! 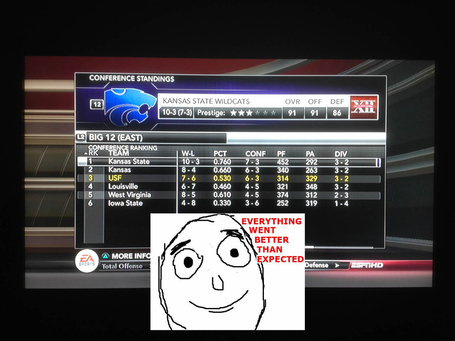 Not only did USF survive a season in arguably the second-best conference in the country, but they actually had a chance to play in the Big XII championship game... until they got clobbered by Kansas in the last game of the regular season. The Bulls went 7-5, earned a trip to the Alamo Bowl to face a 10-2 Utah team. USF was on the verge of the win, but Jordan Wynn threw a touchdown pass with 59 seconds to play and the Utes won 27-23.

Because USF lost that regular-season finale to Kansas, the East Division went to Kansas State, who then upset Oklahoma in the Big XII championship game and set up the most ridiculous thing I've ever seen in an NCAA game. 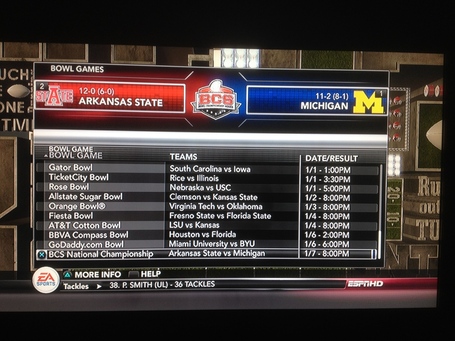 The Internet would break for about a month straight if this actually happened. Gus Malzahn's 12-0 Red Wolves in the title game as the only team with less than two losses. It happened. Really.

The game-by-game results for the Bulls: 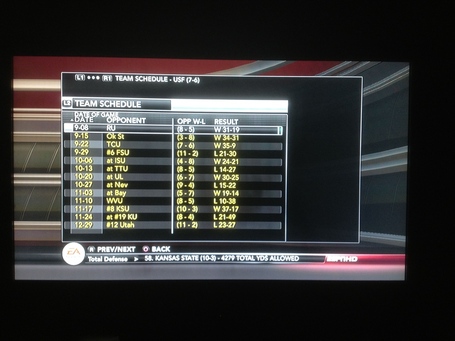 Strange to see USF playing so many relatively low-scoring games in the wild-ass Big XII, but unlike the ACC simulation, the defense actually held up well. And they won their close games -- 4-1 in the regular season in games decided by a touchdown or less. 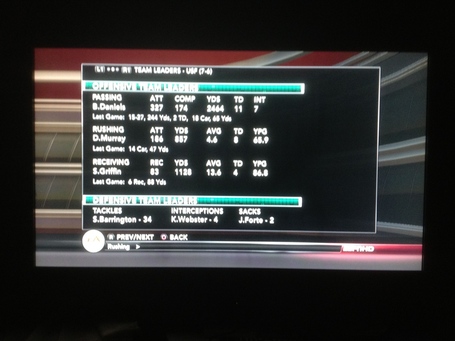 B.J. Daniels didn't play in every single game, and his 11 TDs seem a bit low. But Demetris Murray had a nice senior season, and Sterling Griffin went berserk. On defense, though... Michael Lanaris actually led the team with a whopping 2.5 sacks, though 12 different players recorded at least half a sack. DeDe Lattimore had 80 total tackles, and the defense scored four touchdowns.

So... what happened in that insane championship game? About what you would expect. 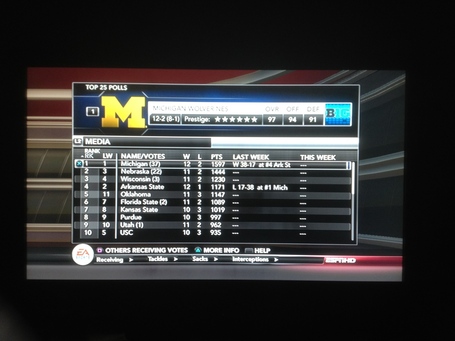 The Wolverines rolled to the (somewhat disputed) national title -- Arkansas State was never in the title game. And look at the B1G, going 1-2-3 in the final media poll! Even Purdue slipped in at #8. In fact, the Big Ten went a combined 9-0 in the bowls. Florida State was finally back, finishing ranked sixth even though they didn't make the SEC title game. And the Big XII won both of their BCS bowls.