Live From Lubbock: Why USF Can Be So Dangerous

The Bulls intend to keep this thing rollin'. Here's how they got this far, and how they can become USF's first-ever Sweet 16 team tomorrow.

Share All sharing options for: Live From Lubbock: Why USF Can Be So Dangerous

We know a lot more about basketball then we did even five years ago. Many of the things we've learned through tools like Synergy Sports, writers like Zach Lowe and (formerly) John Hollinger, and research done by sports analytics professionals at the Sloan Conference every year (if you haven't read the Dwight Effect paper yet, it might change the way you think about defense) is that there are some basic tenets of basketball which we all need to embrace. The stats revolution in baseball, based in the work of guys like Bill James and Voros McCracken, showed the importance of strikeout pitching and on base percentage that lead to the Billy Beane/Moneyball Era. In basketball, we've also begun to learn some absolute truths:

* Getting to the paint off penetration leads to possessions that are more efficient in terms points per possession. Much of this comes from foul shots drawn, and putting opposing teams in foul trouble early

* Deflections are one of the best indicators of defensive success

* Don't worry about the final score to indicate how fast or slow you want to play. Worry about PPP (points per possession) and total possessions per game.

These truths have proven to be self-evident in the men's game, but haven't translated much yet on the women's side. However Jose Fernandez is one coach that embraces these things, and is bringing them to women's basketball ahead of much of his competition.

USF is a team that looks to get to the rim off penetration as much as possible. They want perimeter players to beat their defender off the dribble, and use that to set up the rest of the offense. Drivers either take a layup, feed a post player when the defense rotates over to help, or kick it out for the open three, often in the corner.

Yesterday Inga Orekhova was 5-9 from three point range. Four of those makes were in the corner, and most were set up off penetration (her first was actually an "screw this, I'm making one" from the top of the key early in the game to change Texas Tech's early momentum). The Bulls scored 28 points in the paint yesterday, and were 15-21 from the foul line. Add in Andrell Smith's corner three ball, and 61 of the Bulls 71 points yesterday came from beyond the arc, the paint, or the charity stripe. That's the goal, and the Bulls execution yesterday was outstanding.

The Bulls defensively run a system much like you'll see on most NBA teams: the corner three defensive helper comes from the paint instead of the wing, with the rotation on ball reversal the responsibility of perimeter players. They want to get active hands and deflect as many balls as possible, knowing that deflections often lead to turnovers. I don't have yesterday's deflection numbers, but they were plentiful despite only 13 turnovers. Their active hands disrupted the Red Raiders before they could get into old school 1-4, motion, or post up sets in the half court, which is how they wanted to play the game.

USF has speed, handles, and quickness all over the floor. The Smith Twins are capable of beating most of their competition off the dribble at will. Orekhova can be lethal from the perimeter as a huge offensive weapon. Tiffany Conner is a rebounding and defensive menace. And the freshman tandem of Alisia Jenkins (who showed ice water in her veins yesterday making two free throws to seal the win) and Courtney Williams can also score and defend with great activity.

Cal is a bigger, more plodding team that USF can absolutely beat. Though their leading scorers are two 5'9 guards in Layshira Clarendon & Brittany Boyd, they'll want to slow the pace vs. the Bulls. Cal averages 70.7 possessions per game, USF 75.3. If the Bulls can push that number over 80, find a way to make some 3's, continue to force deflections and keep Cal out of their half-court offense, they can absolutely win this game. Ignore the seed numbers next to the school names: USF is way underseeded considering their talent in this tournament. This very well could be the first USF team to ever get to a Sweet 16 in basketball. And they are very fun to watch.

Where basketball has been involved, it has been awesome to be here. I can't tell you how incredible it was to have a great seat to a wonderful moment in Bulls history yesterday, and I know Jamie would say the same. It's also been a pleasure to spend some time with a few of the great USF staffers that made the trip. We bag on Athletics a bunch, but it's certainly not because of the people working their butts off day in and day out to make the Bulls the best they can be.

Check out what it looked like after the game yesterday:

But the rest of the time? Well, this was my cab today: 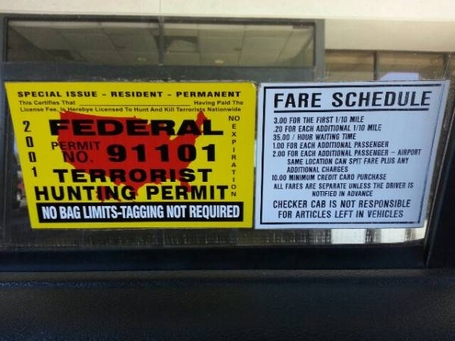 And this pic is from the dust storm that kept you from watching the end of the game on ESPN yesterday: 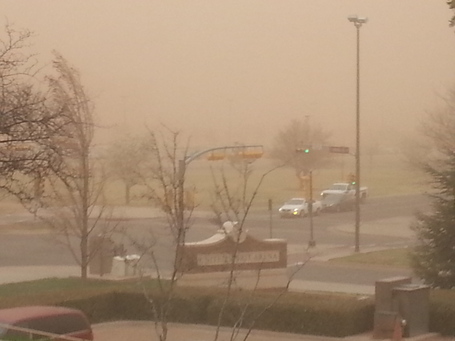 Yup, Lubbock really sucks. Though I thought this was cool: 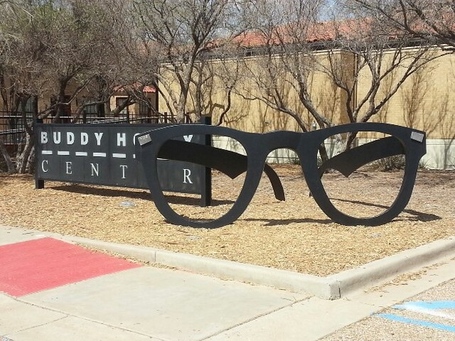 Jamie picked me up yesterday cranking the best of Buddy Holly on his car stereo, which certainly made some of our time here much more tolerable. But when a pair of oversized glasses is the best thing you've seen... that's a problem. Hopefully Spokane will be better to us next weekend.