USF Women's Basketball vs. Texas Tech: The Clutch Plays You Didn't Get To See

We saw the end of the game, but apparently no one else did, so here's what you missed. We are bad at drawing.

Share All sharing options for: USF Women's Basketball vs. Texas Tech: The Clutch Plays You Didn't Get To See

Unless you were in United Spirit Arena, you didn't get to see the dramatic final minutes of the USF women's basketball team getting their first-ever NCAA Tournament win, 71-70 over Texas Tech. Fortunately, we were there, and our fuses did not blow out. So as a public service, we are bringing you the three biggest plays of the game for the Bulls.

With a little over a minute to go, the Bulls were down 3. But as the shot clock was winding down, Andrea Smith spotted Inga Orekhova open in the corner. She didn't need much room to take the shot, and she knocked it down to tie the game at 66. 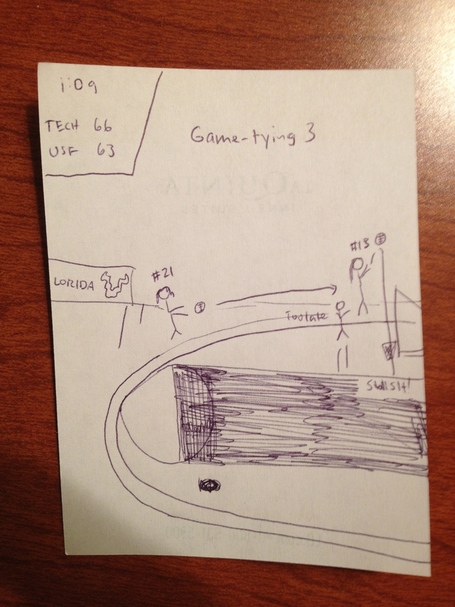 Texas Tech missed on their end, and USF grabbed the rebound, brought it across halfcourt, and called timeout to set up for a potential winning basket. They didn't need it, though, because Monique Smalls climbed up the back of Andrell Smith and knocked her down as the two went up for a lobbed inbounds pass near midcourt. 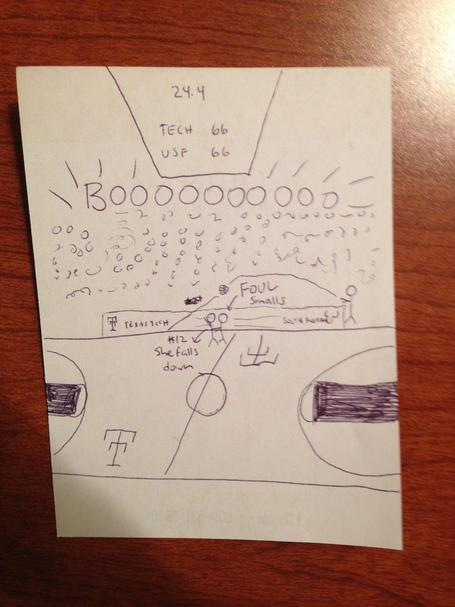 The crowd really did not like this call. But Smith went to the free-throw line and made them both, giving USF a 68-66 lead.

After Smith made her free throws, the Lady Raiders came down and decided to go for the win. The ball swung around to Casey Smalls, who had a good look at a three. But the ball bounced off the rim, and Tiffany Conner got to the loose ball first and was fouled. 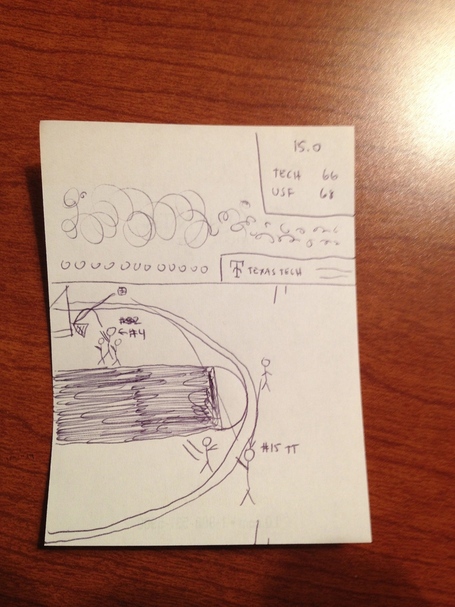 Conner made one of two. Then USF fouled before Tech could get off a potential game-tying three. Smalls missed the second free throw, Alisia Jenkins pulled down a monster rebound, then made both her free throws to put the game away.

USF advances to the second round to face #2 seed California on Monday night. Hopefully we'll get to see all of that game on TV so I won't have to do any more crappy drawings.