Live From Michigan State! We Are There!

Share All sharing options for: Live From Michigan State! We Are There!

Look, I'm really screwed up right now. My back is all out of whack, and the doctor gave me a shot of Toradol (ya know, the stuff that's banned by the NFL) that's starting to wear off. I'm currently sitting in economy class on Delta on my way to Detroit, but even with the Flexeril I was prescribed I am really hurting.

But we're going to try something different here anyway: SBNation apparently has given us the ability to update things via our phones, so I'm going to try and give everyone the sights and sounds of this weekend via this thread. Pics, random thoughts, pre-game analysis (like which QB looks like he's starting... for both teams)... whatever seems relevant.

For all the USF fans in the area, we'll be in Lot 46 for our tailgate tomorrow. We've got some cool surprises for everyone that can make it, and we're currently working with WBUL to possibly broadcast from our site. A very large blow-up Rocky is en route as well, so let's hope we can find a way to inflate it.

Also, we're heading to Notre Dame-Michigan afterwards. Let's do this!

All white for this one. Kickoff tomorrow @ noon. On ESPNU. Go Bulls! #dosomething pic.twitter.com/N8JxA34zoM

Interesting.... probably nothing to it, but something fun for fans to speculate about. And if this is head games for the Spartans coaching staff, I like it even more!

After leaving Windsor, Ontario at about 9pm, making two wrong turns to end up in the middle of nowhere, and begging for a needle to be stuck in my back, I made it a much earlier night than I planned and headed back to the hotel to catch the second half of the US-Costa Rica game.

And who do my buddy Armando and I see as we walk back in the lobby? The USF Men's Soccer team! They looked... tired. But they did earn a 1-1 draw on the road against Michigan tonight. Coach Kiefer seemed in good spirits, and we hope the kids get a good nights sleep. A few thoughts:

Everyone in Canada is so nice, but it's because they're stealing your money. I bought $500 of their crazy funny money with my ATM card... 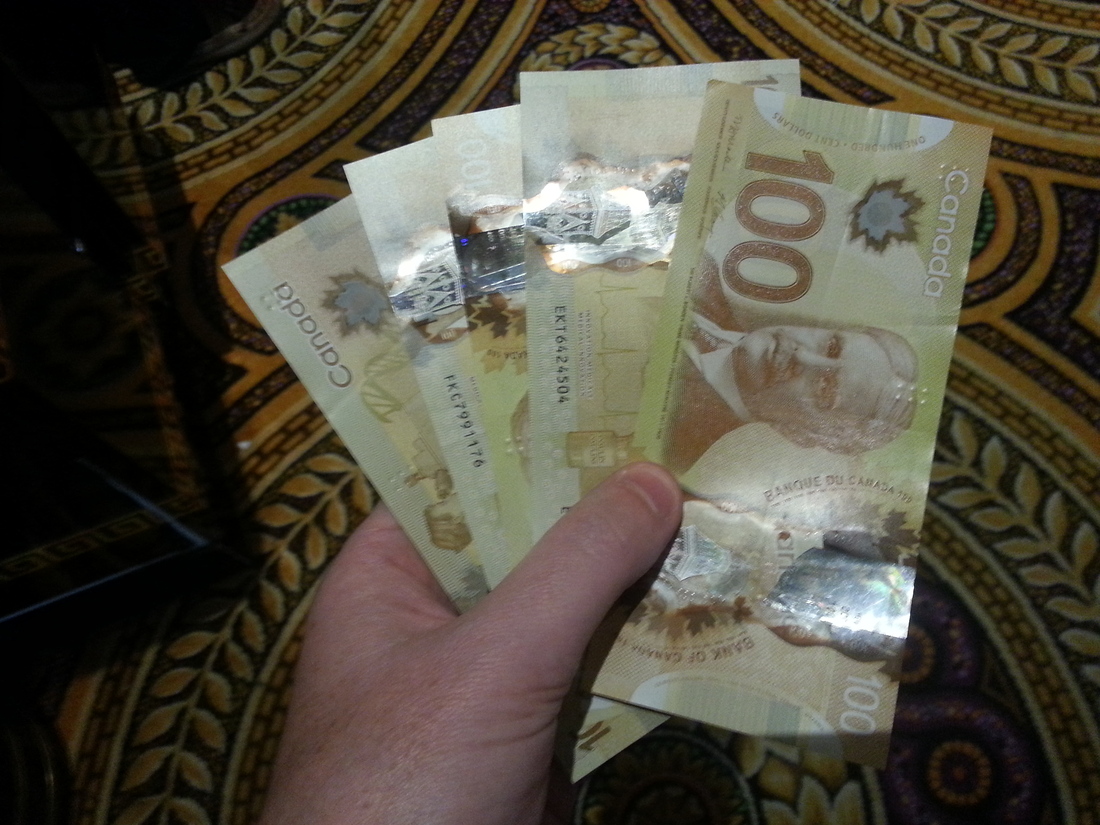 And then proceeded to lose about $60 gambling. OK fine, whatever. But then I go to cash in this Boardwalk/Park Place scrip, and I LOSE 5% IN THE TRANSACTION!! Add that to the $9.25 it cost me in tunnel tolls to get to my home and native land and back... you can't throw ME some free health care there Mounties? Or how about a cell phone signal when I'm all of like 30 feet across the border??

But at least there's duty free booze, so we got prepared for the tailgate tomorrow: 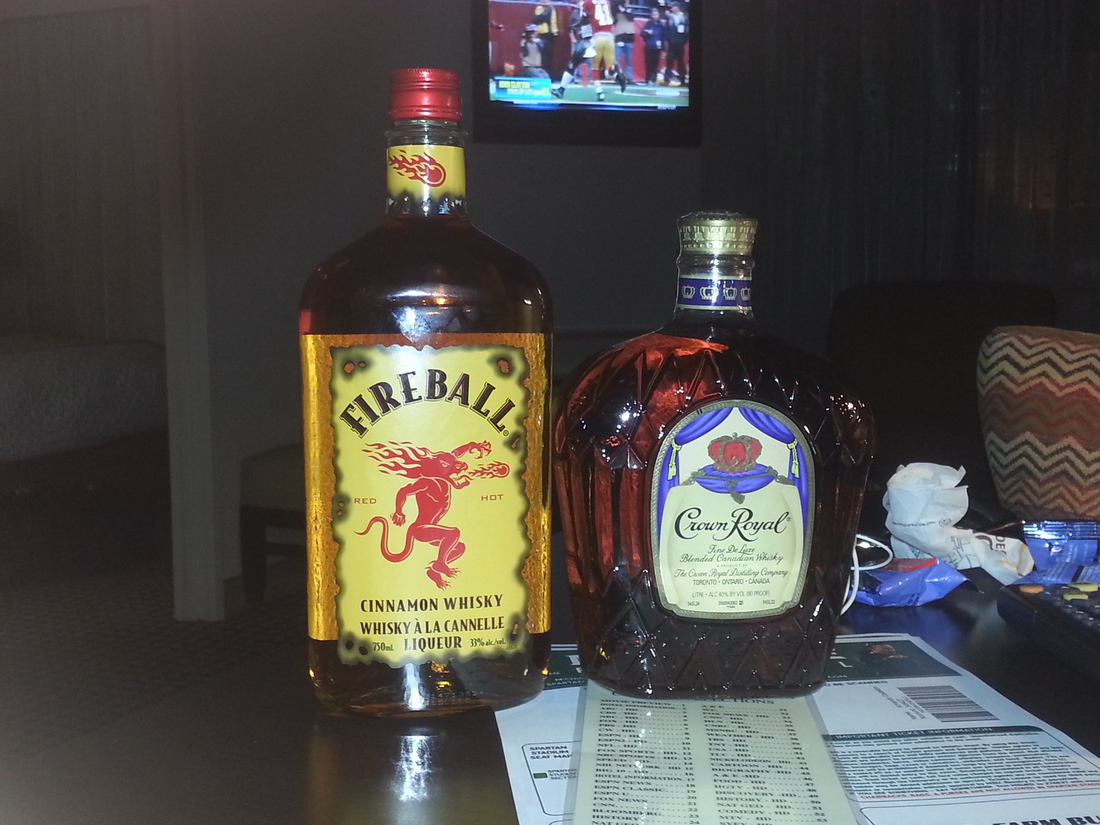 The Crown Royal is to honor my Canadian heritage, and the Fireball is for everyone trying to drink my Crown. "Sorry bro, I'm all out of Crown. But hey, I've go this Douche Juice Fireball instead!"

We should have internet at the tailgate tomorrow, so we're going to try and upload some pics and updates from Lot 46. Be afraid, friends. We're a 24 point underdog, and I've never seen USF fans having to numb the certain impending pain on the road like this before.

The cellular service at both MSU and Michigan yesterday was ridiculously bad. It was like living in the early 90's all over again with people unable to get together or meet up because no one could make or receive a phone call. How did Jerry and Elaine ever get together under these circumstances?? It also screwed up my plans for this page, but I'll backtrack, recount, and add pics to give you some retroactive color for what ended up being an unforgettable day.

The USF Tailgate at Lot 46 was quite fun, if only for the amount of Bulls from all over that congregated in the same spot. You can always count on USF fans to just crush a tailgate even when it's 1000 miles away. Big props to Spiky-Haired Bulls Legend Brandon Faza for putting a lot of work to make sure all the herd was together: 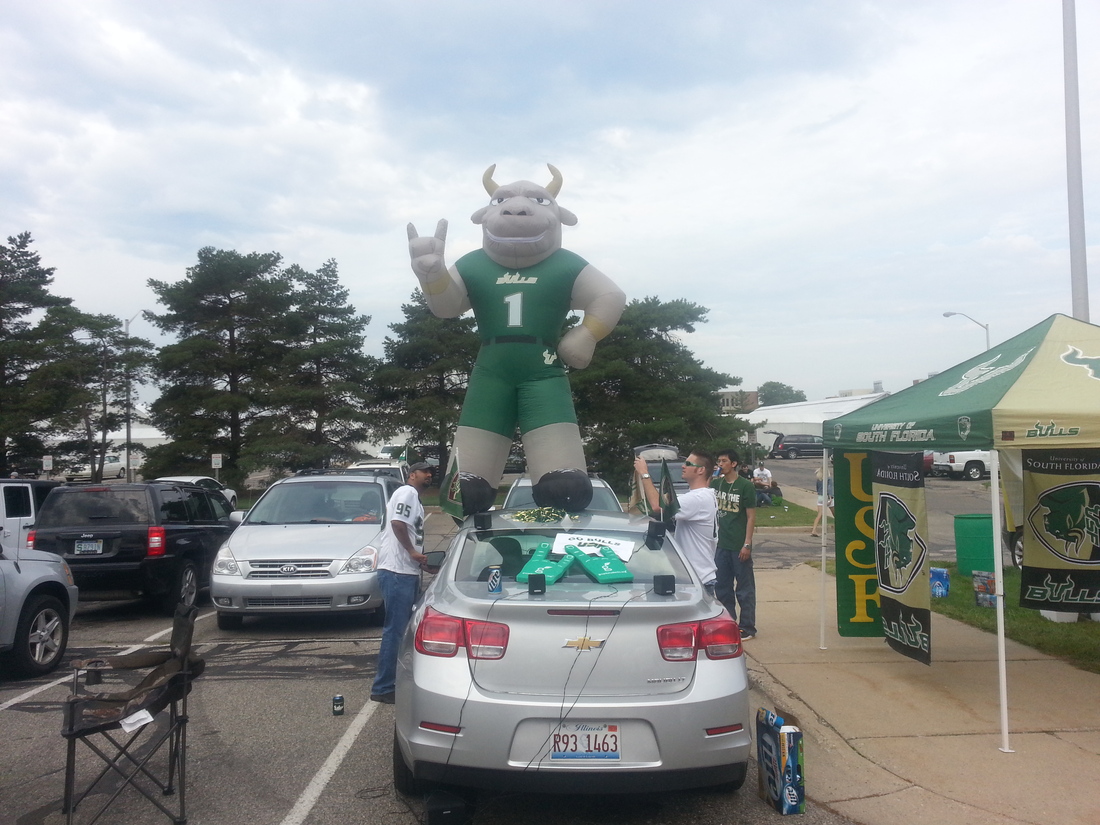 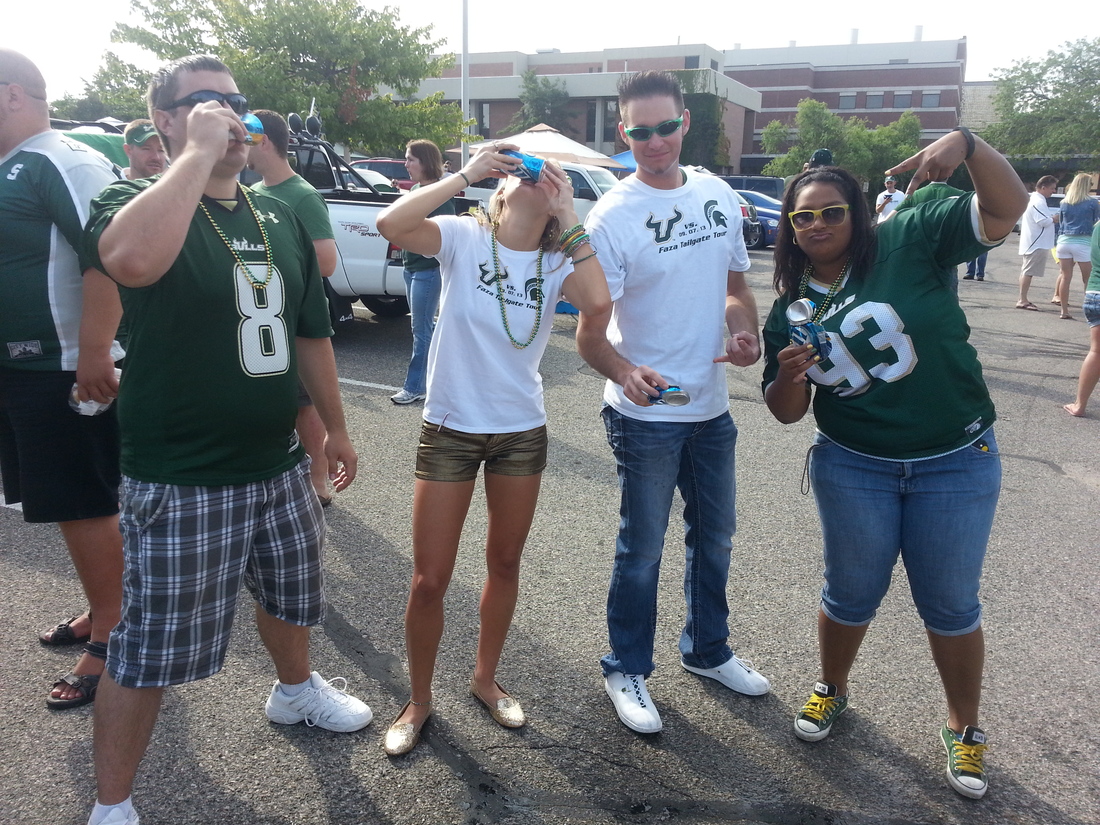 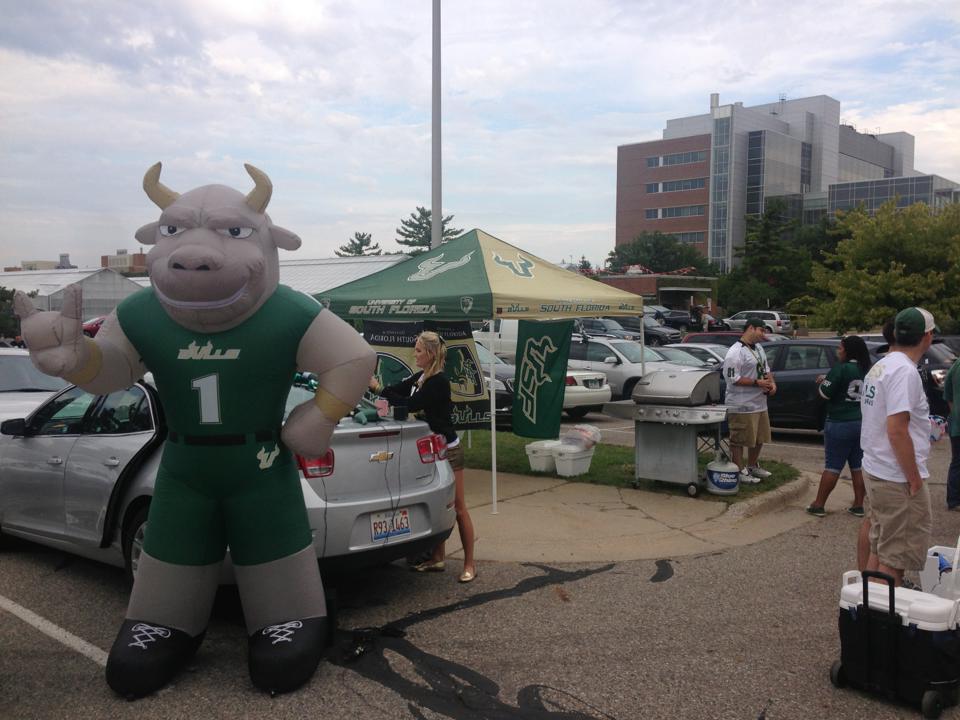 But the true winner of the day was my buddy Brett, who wore this shirt that, as Jamie said on Twitter: "GREATEST USF SHIRT EVER NO QUESTIONS ASKED" 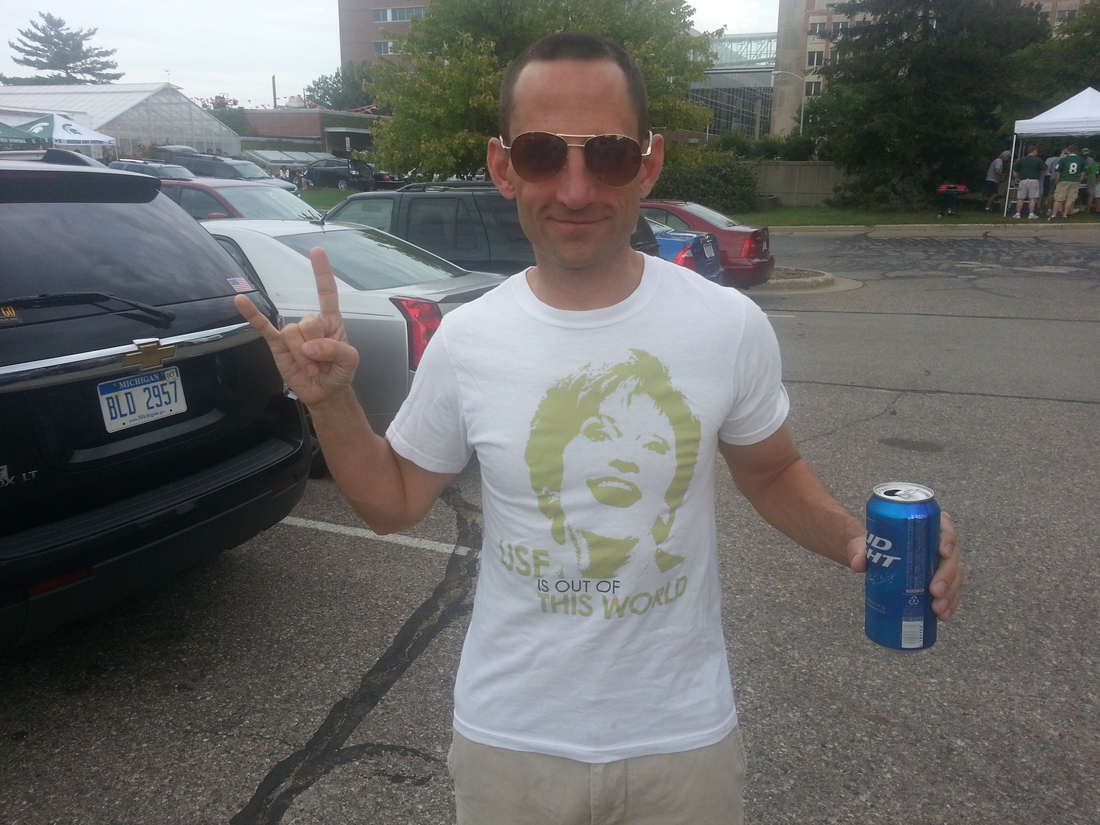 At the tailgate I met up with Green Akers from Off Tackle Empire and his buddy Colin, who stuck me with these awful seats for the game: 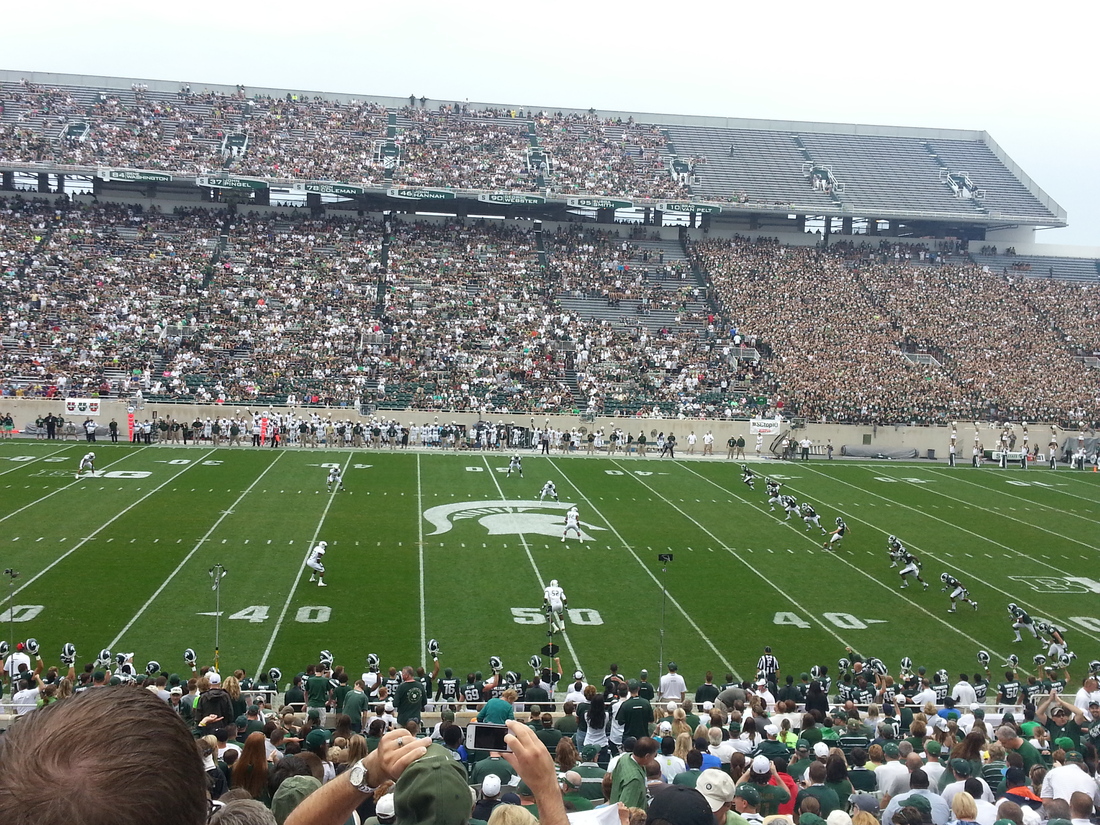 Everyone in their group couldn't have been nicer, and believe me they're as frustrated with their offense as USF fans are with theirs. The difference is MSU has a first-class defense and they know it. Paraphrasing Andrew: "It's a joy to watch this defense, but it sucks they can't get any help." Hey, at least they have one side of the ball to cheer about.

We'll have thoughts on the actual football game tomorrow, but basically everyone I met in Lansing was beyond kind and wonderful. They are incredibly hospitable, and we can't say enough nice things about them. Even this guy. 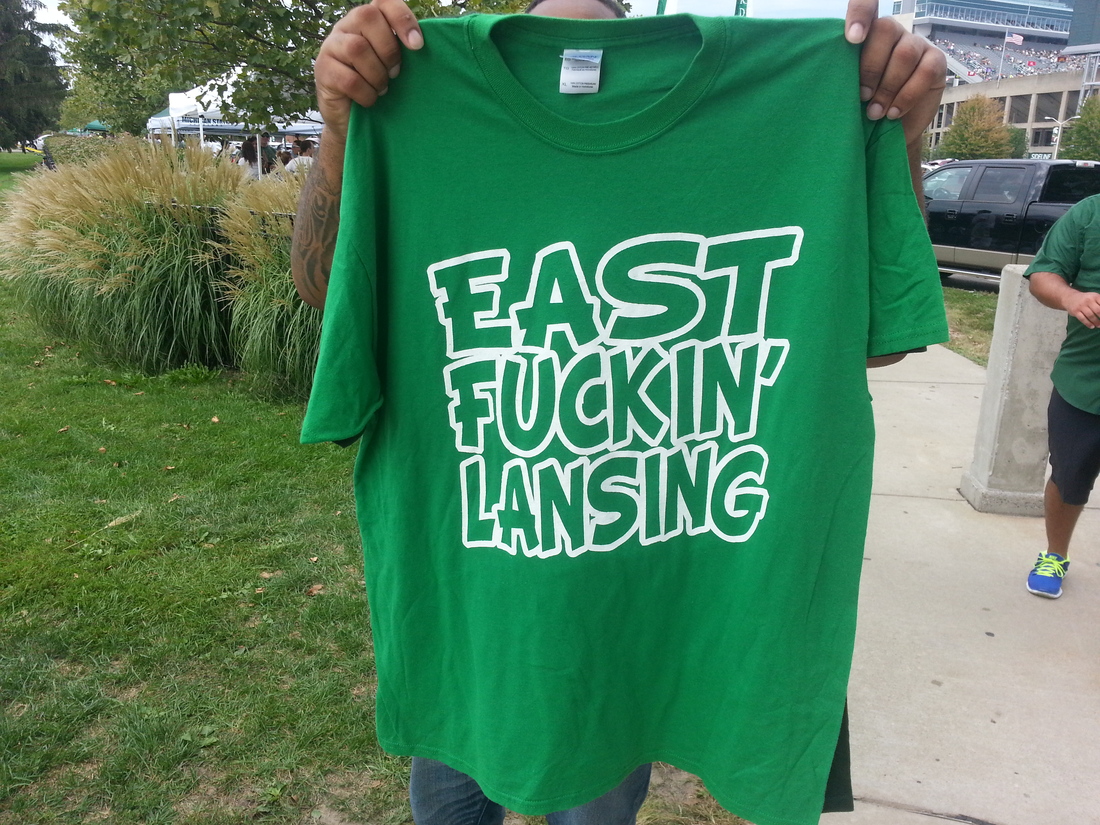 I also saw Ann F'in Arbor shirts, so thanks West Virginia Meme for killing that for everyone.

We do have to take one shot at East Lansing: Your student section sucks. The students, besides not being fun or interesting at all, as well as trying to start The Wave, also did this: When the Spartan offense was struggling to move the ball yet again with Andrew Maxwell behind center, the student section started a "We Want Terry!!" chant looking for freshman QB Damion Terry to get in the game. Literally THREE PLAYS LATER, including two completions for chunks of yards by Maxwell, they started the "Let's Go Maxwell!!" chant. Seriously?? I mean can we get just a little intellectual integrity there, Sparty??

After the game I took the advice of our friends from The Only Colors and hit The Dairy Store on campus. The rumor is this ice cream is made from the milk of some of the best cows on earth, and the place is legendary. I waited about 15 minutes in line for this from their collection of flavors named after each B1G school: The Buckeye Blitz. 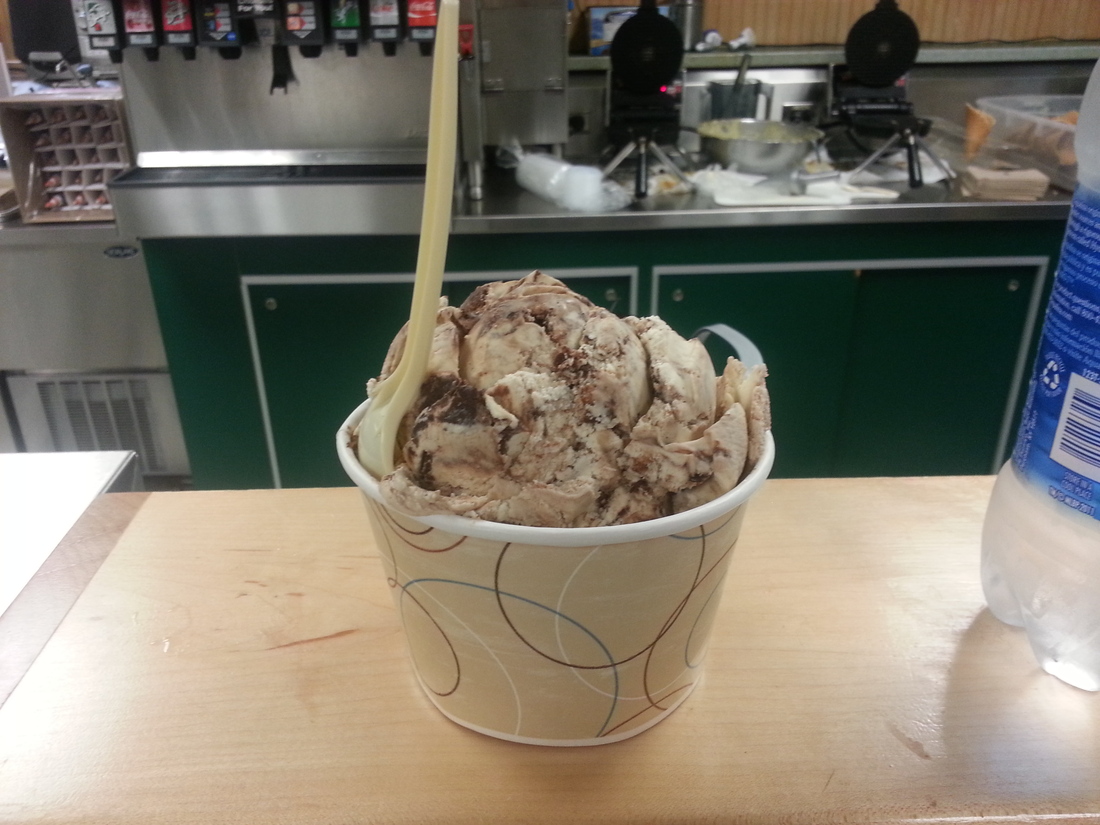 OH YOU DELICIOUSNESS HOW CAN I HATE URBAN MEYER ANYMORE??? It was some of the best ice cream I've ever had, and had actual buckeye candies inside. That place is an absolute must stop for anyone ever in Lansing. Also, $3.95 for the largest one they had, and $1 for a bottle of water. LOVE.

We left Lansing and headed to Ann Arbor for Notre Dame-Michigan. This was the non-USF portion of the trip so I'll try and keep the gushing to a minimum, but that game was a life-altering experience for a college football fan. The city itself was basically shut down. We went to the legendary golf course tailgate across the street from the Big House about 90 minutes before kickoff, and people told us they were in line at 8am to be ready when the gates opened at noon. I've been to a lot of college towns and watched a lot of college football, but I have never seen or felt anything like I did in Ann Arbor last night.

The crowd on 3rd downs and scoring plays made some of the loudest and most passionate sounds I've ever heard. We were in the 94th row, and every person sitting around us was glued to every single play. This was as much a religious experience for them as it was a football game.

Also the game presentation was literally flawless. The band played at exactly the right moments, the perfect music always played at the perfect time. The drum line was great. The intro videos were great. They honored their Final Four volleyball and men's basketball teams at the first two media timeouts, and as the crowd went bananas the band played "Hail To The Victors" while the camera went along the line of the team showing them singing along.

They even made Seven Nation Army awesome, and I didn't know that was possible anymore.

As a program and a fan base, they get it on every single level. It was an athletic department that knows what it's doing, right down to the ushers being gentlemanly and polite when I got too close to the walkway railing to take pictures from midfield. Everyone had been trained to sing the same song the same way. The students have an app on their phones where they can check in at Olympic sports and earn points to get better football tickets. The inside of my collector's soda cup had a quote from Bo Schembechler. They had thought of everything, and had an answer for it all.

The other thing the former athletics employee in me noticed: They are not the Wolverines, they are Michigan Football. Besides the apparel stores being named The Den, there was literally not a single reference to Wolverines in the entire stadium, but the Block M was everywhere. They have branded themselves perfectly. It was incredibly well done, and that was before the Beyonce-themed halftime show by the Michigan band where the lights got dimmed and Bey Bey herself was on the big screen introing the set.

It was also another reminder in how far USF has to go. We'll get there someday and hopefully in my lifetime, but the gap is just so massive. And as readers of this blog can attest, we think it wouldn't hurt for us to take a few lessons from the big boys every once in a while. Sort of like dressing for the job you want, not the job you have.

Oh, and they honored Dolphins owner Steven Ross for his $200 million gift to the Ross School of Business and Michigan Athletics with a full soccer-style tifo in the student section and some "Hail To The Victors." That doesn't hurt either.