How much more obvious does it get that USF Athletics is a complete disaster?

USF won the Capital One Bowl Mascot Challenge yesterday. They held a press conference. We attended it. This is what we saw.

Balloons and confetti for our big victory. 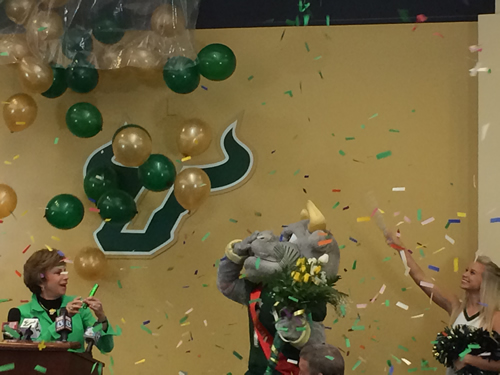 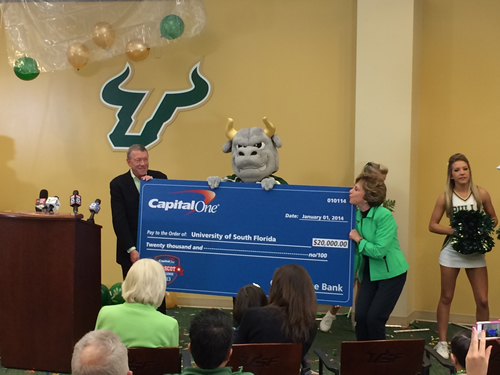 Our football coach and basketball coach posing for pictures with the check. 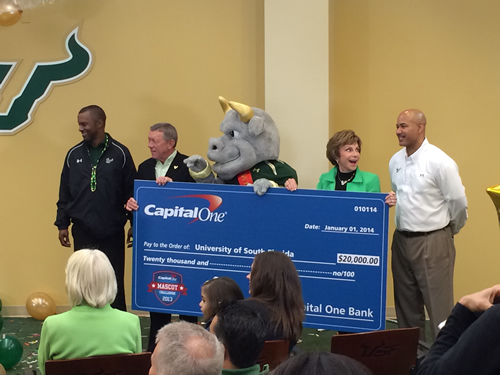 We saw our athletic director at a podium in front of assembled media. He did not take questions. He has not taken open questions in this format in at least four years, and maybe even longer... we're not sure since we're just going off memory. 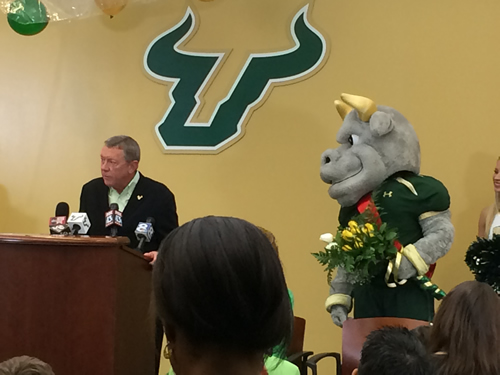 Here's every local newscast last night: "Here's some footage of USF's mascot celebrating a victory in a glorified online poll, and now let's go to the highlights of UCF winning the Fiesta Bowl."

And now we go to Fox 13's Paul Dellegatto with the weather:

Here's the thing. We've known things could go really, really wrong for USF for a long time. We laid it all out when conference realignment started up way back in 2010. We understood what got USF over the top last time (mostly Lee Roy, with an assist from Judy). We knew those pieces weren't necessarily in place this time. Then everything started happening and all our worst fears came true. They pledged loyalty to the Big East, and even hitched their wagon to UCF in public. How'd that work out for us?

The football team is a disaster that Willie T is going to need a lot of time to turn around. The basketball team is in real trouble (more on that tomorrow), and we were the ones screaming from the mountaintops how underrated we thought they were. We get called "negative" or "haters" by a lot of people that are invested in the party line either financially or emotionally, but we got on the band wagon for hoops early and with enthusiasm. We were practically waving pom-poms down Fowler Avenue trying to get people to buy season tickets.

Instead of growing our donor base, fundraising has been going down the last few years, sticking students with a huge chunk of the bill. Ticket sales are dropping. How much are they dropping? We don't know, as the public records requests we submitted on October 30th still haven't been returned to us.

Fans (especially students, the donors of the future) don't want to come to football games anymore. The Sun Dome still doesn't have a corporate sponsor after over a decade of searching. The budget is about to become a big problem, with revenues and TV money going down and expenses only going up. We can't market ourselves or fundraise to save our lives, so we internally promoted someone to Senior Executive Associate AD who lost his last job because he couldn't market or fundraise. Everywhere you look, USF Athletics accepts and rewards mediocrity.

Maybe it wasn't so obvious before, when there were still some things to feel good about out of the Selmon Center, but it doesn't get much more obvious than it should be now. USF completely fell asleep on the job. We took all the opportunities and advantages we had in 2005 and threw every single one of them away. Then that school in Orlando, the gang that could never shoot straight, the program USF took delight in whipping in any sport they dared scheduling us to play, blew right past us. Now they have a huge, indelible scalp on their wall, and they can hold it over us for who knows how long. Years, if not decades.

By the way, do you know how USF won the Capital One Mascot Challenge? This was a very coordinated effort. Athletes voted in their spare time. The Alumni Association staff did too. Same with the people in the athletic department. Sure, fans did their part as well. But there's no way Rocky runs the table and wins this contest without all that internal support. What they did wasn't against the rules of the contest or anything, but... why can USF Athletics show this level of persistence and detail for a mascot contest, and not for something a lot more important than that? What kind of priorities do we have?

Something has to change, and it has to change right now. Not in a couple years, when all these problems are even worse. A signal has to be sent that USF is not going to stand for mediocrity anymore. That we want to win actual championships, not mascot championships. What we have now should be totally unacceptable. It should make you angry. Angry enough to #DoSomething.