11 months into his tenure, the future of USF Athletics is brightest it's been in over a decade under the leadership Vice President of Athletics Michael Kelly. But it's not achievements like scheduling Florida, Miami, and Alabama that shows his true value to the program. His true value to USF is when he solves problems, just like "The Wolf" in Pulp Fiction 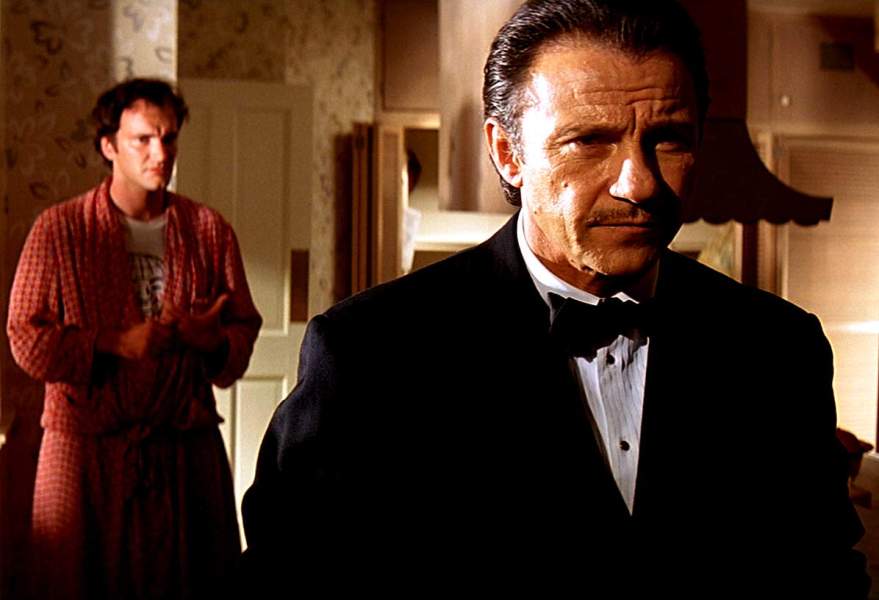 Looking back now, it's hard to look at the 38-10 loss to then #9 UCF and the fallout as the sign that things were about to get much better at the Lee Roy Selmon USF Athletics facility. The loss was bad enough: a blowout to a rival who won their 24th straight game which gave USF the dubious distinction of being the first team to start 7-0 and end the regular season 7-5. Fans brought signs that called for the head of then-Offensive Coordinator Sterlin Gilbert, whose offense only mustered 309 yards, including an atrocious -8 yards on 11 plays in the 4th quarter, and infuriated the entire fan base with the bizarre substitutions of quarterbacks Chris Oladokun and Brett Kean throughout the game. Exacerbating this situation was Charlie Strong's bizarre and much-maligned press conference where he appeared to throw every player under the bus, which caused several USF alumni in the NFL to mock and criticize him. #FIREEVERYONE was a common hashtag among the USF loyalists. Adding all this to a fanbase that felt antagonized and disrespected by previous and current USF leadership, and all the ingredients were there for that day to be the day USF Football officially died as a football program with even the potential to be relevant.

Well, every ingredient except one, that is. A lot can be gleaned from how Michael Kelly led USF from that day in November to today, where USF successfully scheduled a home game against Alabama - which will be Alabama's first non-conference road game since 2011 and their first outside of the P5 since 1992 - by watching the 10 minutes of screentime of Winston Wolf, the "fixer" character from Pulp Fiction.

"You're Jimmy, right? This is your house? I'm Winston Wolf. I solve problems"

Over the next 10 minutes of screen time, Winston Wolf - portrayed by Harvey Keitel - puts on a leadership crisis clinic for the ages. Dealing with panicked mobsters who have accidentally shot a passenger in the car and need to get rid of the body before their friend's wife gets home, Winston calmly, but firmly directs them to clean the car, obtains the necessary blankets to cover up the blood, determines the destination for the vehicle, diffuses backtalk from John Travolta's character, and gets the car hidden without being detected.

Criminal activity aside, The Wolf's actions under pressure are just cool. He thought every possibility through, assessed the issues, and got everybody to do their part. He didn't take complaints personal, and didn't cave to pressure. And reactions under this kind of pressure distinguishes the great leaders from the bad.

Sports have a funny way of exposing leadership problems. Losing leads to panicking, which leads to rushed and foolhardy decisions. Poor leadership often leads to losing on the field. Look at everything going on with the Los Angeles Lakers right now. Ownership changes led rather quickly to sustained losing from once-proud franchises like the New York Knicks and the Washington Redskins.

Meanwhile, quality leadership often leads to wins. The New England Patriots dynasty has partially to do with quality leadership in concert with poor or inconsistent leadership from their in-division rivals. (I'm old enough to remember when the Patriots were the 80s version of the Browns). The Golden State Warriors' fortunes changed not long after a change in ownership. The Chicago Blackhawks' Rocky Wirtz inherited the team from his father - who refused to pay for even a receptionist - and changed many of the team policies, and two Stanley Cups soon followed. Even when these franchises cut their players, those players often rave about their leadership, expressing gratitude for treating them like men.

The stories are the same: leadership patiently fixed problems, heard the fanbase but made independent and informed decisions, which lead to quick increases in morale, which eventually led to increased winning.

The first time I realized that Michael Kelly would fix problems like "The Wolf" was his handling of Sterlin Gilbert's situation. In retrospect, I should have known sooner, since he was not only the Chief Operations Officer for the College Football Playoff, but was also the ACC's point person for their unique scheduling agreement with Notre Dame. Both of these processes required large-scale coordination between dozens of people and organizations with large egos and different motivations, and could have easily been undermined, but he got them across the finish line with excellent results.
Mr. Kelly listened to the USF fan base as they screamed for Sterlin's head, and then patiently worked on the situation, which worked out when Sterlin took the HC job at McNeese St. Not only did USF not have to pay Sterlin for severance, but they managed to not undercut Charlie Strong by not painting him as a coach who fires his OCs at the first sign of trouble. (I don't know how it went down, but my educated guess is that he did not leave things to pure chance.) He worked with Charlie Strong instead of firing him. Next, he coordinated the hiring of Kerwin Bell as the fanbase hoped Shaun King would be rewarded for his loyalty, which turned out to be the right move. He empowered his employees to stand up to the now-defunct USF rebranding efforts, and built a stronger culture. (For example, bringing back USF BullsFest). Many USF employees I've spoken to recently are the happiest they have been in a long time.
Today, USF fans are celebrating the scheduling of a home game against Alabama, but the manner in which USF has scheduled teams like Alabama, Florida, and Miami is what truly stands out. My educated guess is that Michael Kelly, being the former COO of the College Football Playoff, performed his due diligence about the realistic path to the CFP for a team outside the "Power 5", and whether such a path is available to USF in particular. One aspect of the scheduling philosophy is clear: develop a reputation that USF will play anyone anywhere.
Complicating matters is that USF is competing for opponents with our neighbors down I-4, the same UCF team that put that 38-10 beating on USF only last November. Emboldened by two consecutive New Year's Six bowl games, UCF aimed to schedule home-and-home games against Power 5 schools. When USF announced 2-for-1 series with Florida and Miami, UCF Athletics Director Danny White objected, stating "It’s a precedent I don’t like being set in our conference for schools to start doing a much higher volume of two-for-ones." His comments, as well as the responses by the subset of UCF fans who troll on Twitter, led to widespread mockery by the national media.
(Note: This is where I might normally come in with research and stats, and I did a lot of research on Dr. White's claims and the media response. Here's the TL;DR - When the P5 opponent has seating under 50,000, his home-and-home claims are true. Once you go over 50,000 seats, unless there is an arrangement like Notre Dame and Navy, the claim doesn't hold much water, and those are the teams we need to beat to get the CFP Committee's attention. Also, I feel that much of the criticisms by the national media of UCF is unfair, including the "haven't earned a seat" claim. Come on, now. The last two teams to earn seats at the P5 table were Rutgers and Boston College.)
Here's the thing: the one person who has said absolutely nothing about this debate: Michael Kelly. Just like Winston Wolf didn't bicker or complain when Vincent Vega demanded a "please" before cleaning the car in Pulp Fiction, Michael Kelly didn't so much as give a peep in response. (At least, none I can find online.) They just got the next task at hand done. The next task? Scheduling Alabama. I would be willing to guess that, had Kelly entered into the debate, that Alabama may have been less willing to schedule USF. While I don't have any inside information, I can only guess that Alabama agreeing to their first non-conference road game since 2011 and their first outside of the P5 since 1992 had to involve significant relationship building, professionalism, and teamwork. If USF is ever going to join a P5 conference, building these kinds of relationships is the path, just like it was when we joined the Big East.
People don't like doing business with trolls. Almost everyone who published an article about the series took a shot at UCF. Narratives matter, and USF grabbed control of the narrative.
Case in point: look at the difference between USF and UCF's future scheduling. (For the record, if I were a UCF alum, I'd be none too pleased about this.) 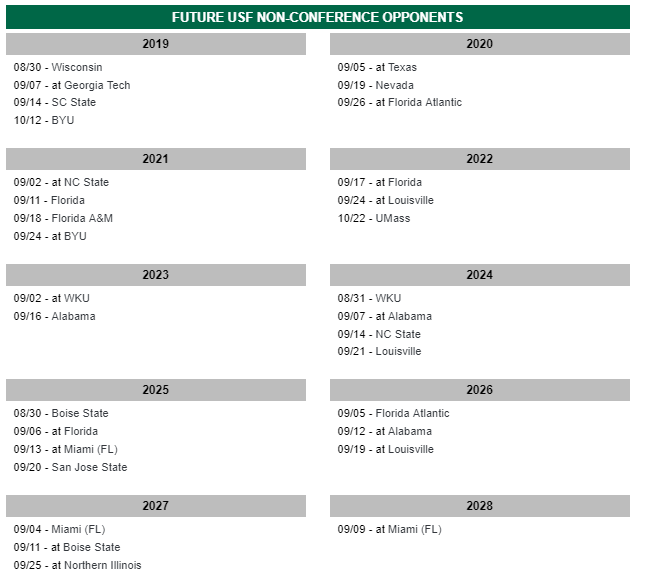 The announcement of the Alabama series must have been the result of 11 months of culture building, patient and responsible leadership, and professional conduct. This kind of culture building in sports more-often-than-not leads to wins. It's worth noting here that Charlie Strong now has a built-in advantage over UCF in recruiting the upcoming 2020 class. He will be able to say "during your 4 years, you will play home and road games against Alabama, Florida, and Louisville." UCF can't even counter with Louisville, only North Carolina. These things may not matter to fans, but these things sure do matter to recruits. Whether USF takes advantage of these opportunities and advantages remains to be seen, but the opportunities and advantages are now there, which is all you can ask for.
All this from the remains of a 38-10 loss.
To paraphrase Samuel L. Jackson, "It's been a pleasure watching you work, Mr. Kelly."