With the USF SunDome undergoing renovation, our intrepid basketball reporter will follow the South Florida basketball team around the USF campus this season, as the team plays its games in different buildings across the campus. Check back after each home game for updates (hopefully). 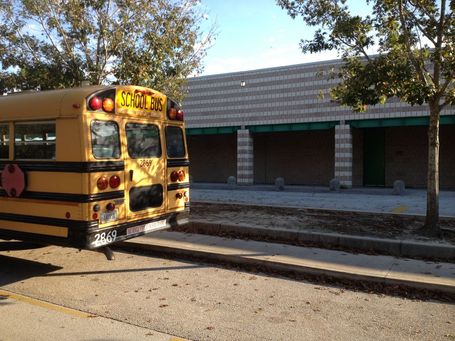 The debut performance of guard Jawanza Poland spurred the USF Bulls to a 70-55 victory over the Cleveland State Vikings at Pizzo Elementary School.

"With the university on Christmas break, we wanted the guys to have some fans here for support," said athletic director Doug Woolard.

Pizzo Elementary is located on the USF campus, in a cooperative effort between USF and Hillsborough County. The game was held during an extended recess.

Poland opened the game with a thunderous put-back dunk, to the delight of all 621 students at Pizzo, as attendance to the game was compulsory.

Both teams shot poorly in the first half (USF 35.7%, CSU 33.3%), as they had trouble adjusting to the six-foot rims at the school's playground.

In the second half, however the Bulls altered their strategy to take a large lead.

"When they challenged our shots, we just jumped as high as we could," said USF guard Anthony Collins, "And then we would shoot directly down into their out-streched arms. With the rim so low, it was goaltending every time."

"We couldn't win," said Cleveland St coach Gary Waters."Either we jump and challenge and get called for goaltending, or we don't challenge and they hit open shots."

Despite the improved second-half effort by the Bulls, the crowd was less than enthusiastic

"The crowd was really into it during the first half," said forward Augustus Gilchrist. "but then in the second half, the kindergarten to second graders had nap time. Kind of killed the support."

"It's the only time I get to dunk, ever, so it was great to get out and show what I can do," said McCluskey.

The game was delayed 22 minutes during the second half as mass hysteria ensued at the sight of an ice cream truck.

Freshman Jordan Omegbehin was involved in an incident on playground complex. Omegbehin, 7'3" and 291 lbs, became stuck while sliding down the swirly tube slide. Campus security informed authorities, who utilized the jaws of life to remove the player, who is redshirting this season.

"I'm just sitting on the bench every game, bored out of my mind," said Omegbehin. "After the kids were using my arms as monkey bars, they kept goading me into going down the slide. Peer pressure is tough."

Omegbehin escaped withou any injuries except the incessant teasing by the students.

In honor of Poland's outstanding debut performance, after the game the Tampa Bay chapter of the NAACP renamed Kwanza, the African-American held next week, to Jawanzaa.